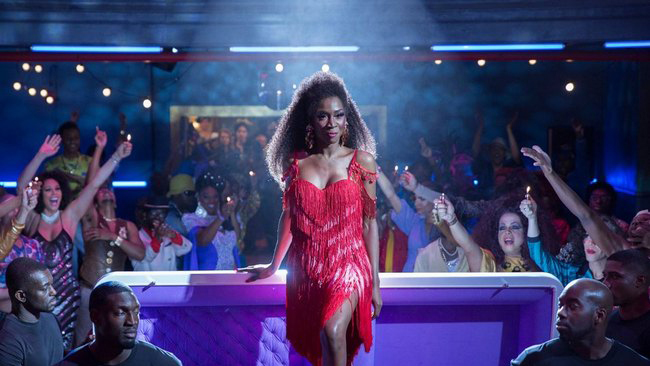 Ross originally kickstarted her career in the entertainment industry when she appeared in Her Story, a comedy-drama web series about the dating lives of trans and queer woman in Los Angeles. Since then she’s gone on to have roles in Danger & Eggs, Claws, and Transparent. But, it’s her role in the critically acclaimed series Pose as Candy Ferocity that has really put her in the spotlight.

Fans of the show should be aware of her shock exit from the series in the most recently aired episode, and we’re still coping with the news. But there is light at the end of the tunnel because it won’t be long before we see Angelica gracing our TV screens once more and in the process making trans history by being the first trans actor to secure two series regular roles.

Ross has turned to Twitter to announce that she isn’t out of a job because she’s scored a role in season 9 of American Horror Story. In the tweet, Ross thanked Pose and American Horror Story creator Ryan Murphy and went on to add she was “honored and excited” to have been cast in season 9. While she hasn’t revealed any details, a recent Instagram post by Murphy praising her for her role in Pose, has said that her American Horror Story: 1984 character would be “another unforgettable role.” 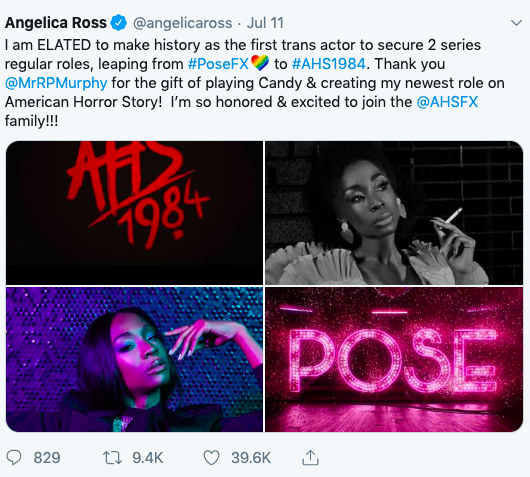 Last night’s episode of Pose required us all to dig deep — @janetmock as writer, myself as writer and director, but most of all our incredible leading ladies. I must applaud @angelicaross for her tour de force of a performance as Candy Abundance Ferocity. It has been a gift to watch her blossom as a true star and undeniable talent. Though she will always be our Candy, and our show suffers this incredible loss, I am elated that the world will get much more Angelica. She is joining the American Horror Story family in another unforgettable role. Congrats Angelica for making history, leaping from #PoseFX to #AHS1984. Welcome to the #AHS family!

As per usual with the lead up to a new season of American Horror Story, the creator has been very tightlipped as to what to expect from the upcoming season. What we do know is season 9 will pay homage to the slasher subgenre of horror that reached its peak in the early 1980s thanks to films like Friday the 13th and A Nightmare on Elm Street. Expect a lot of 80’s nostalgia.

We so can’t wait to see what Angelica Ross brings to the world of American Horror Story. We bet she’s going to be all kinds of fierce!

What do you think of the news?