Mattel releases the Barbie doll you never knew you needed! 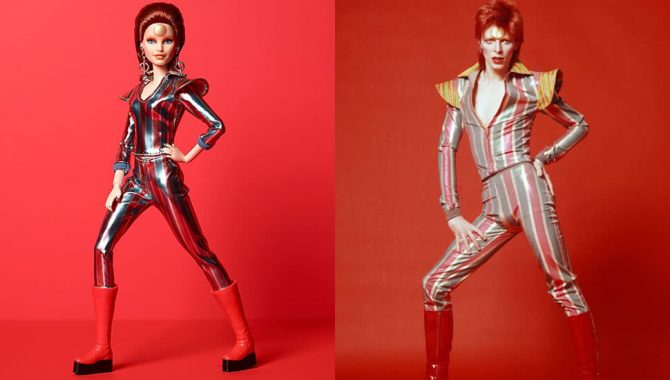 Here’s the Barbie doll you never knew you needed.

Toy company Mattel unveiled its latest doll this past week inspired by the greatness that is David Bowie and more specifically his iconic Ziggy Stardust persona.

Called the David Bowie Barbie, the doll captures one of the late queer English pop/rocker’s most iconic looks while celebrating the 50th anniversary of Bowie’s Space Oddity, which burst on the music scene with critically acclaimed back in 1969.

Bowie built both a name and was loved for how he toyed with gender expression. Throughout his decades-long career, he adopted a myriad of personas, but there’s no denying that Ziggy Stardust remains to this day his most famous, first debuting the character with the release of his fifth studio album, The Rise and Fall of Ziggy Stardust and the Spiders From Mars in 1972.

“In a definitive celebration of two pop culture icons, Barbie honors the ultimate pop chameleon, English singer, songwriter, and actor, David Bowie, whose dramatic musical transformations continue to influence and inspire,” Mattel said in a statement. “With a career spanning over five decades, David Bowie was at the vanguard of contemporary culture as a musician, artist, and icon. He was, and remains to be, a unique presence in contemporary culture.”

In recent years, the toy company has really picked up its game in supporting LGBTQ causes, with Mattel releasing Barbies with “Love Wins” t-shirts in support of marriage equality in 2017, while last March, they also celebrated International Women’s Day releasing a limited edition collection of Barbies resembling famous woman from history. One of those being the renowned bisexual artist, Frida Kahlo.

I’ll be honest, if there’s one Barbie doll I’d buy, it’s definitely this one.

While the initial run of dolls almost sold out immediately, never fear, it’s already available on back order.